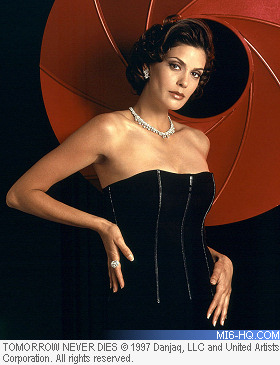 PLEASED TO MEET YOU
Bond is reunited with Paris at the launch of her husband's new worldwide satellite news system. 007 is not at first given a warm welcome, but never-the-less, Paris proves helpful after a little softening up and "pumping for information".

"I used to look in the papers every day for your obituary."

CAUGHT IN THE ACT
James Bond manages to get Paris, his former lover, into bed one last time. The location - his hotel room. The time - right after Mrs. Carver informed Bond she had made her bed, she was standing in his doorway. But as they say their final goodbyes, Paris knows she's never going to escape the clutches of her murdering husband or assassins. 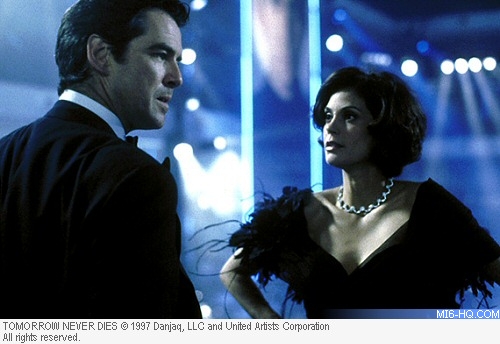 PROFILE
Teri Hatcher plays Paris Carver, the ex-lover of Agent 007. Wife of the worldwide media baron, Elliot Carver, Paris has a secret past which proves her undoing. In Tomorrow Never Dies, a relationship with her old flame, James Bond, leads to an untimely demise at the hands of Dr. Kaufman.

Her short role in the film leaves Mrs. Carver enough time to get Bond in the know about her husband's activities before Elliott Carver turns her to the deadly hands of Dr. Kaufman, a "doctor of death".

BIOGRAPHY
Teri Lynn Hatcher was born and spent much of her childhood in San Francisco, California. She studied drama at the American Conservatory Theatre as well as pursuing her knowledge with an undergraduate degree in mathematics and engineering. Before hitting the acting world, Hatcher performed as a cheerleader for San Francisco 49ers, her local football team.

Soon she was asked to join at friend at an open casting call in Hollywood. Teri was offered the chance to audition, took it, and landed her first screen role in the TV series, "The Love Boat".

After "The Love Boat", Teri Hatcher took up a part in "MacGyver", as Penny Parker. Her real claim to fame came with her winning the role of Lois in "The New Adventures of Superman". Teri commented later she was pleased to leave the image of the dizzy blond, Penny Parker, and move onto something different.

In 1994 Teri married the actor Jon Tenney, whom she had a daughter named Emerson Rose with. In 2004 Hatcher and Tenney filed for a divorce.

Teri Hatcher can dubiously hold the record for being the most "downloaded" celebrity of the late '90s. But from her strivings as an actor and with her great ability for science, Teri Hatcher is more than just another pretty face.

She came back into the public spotlight in late 2004 as one of the central characters in the hugely popular television series "Desperate Housewives".