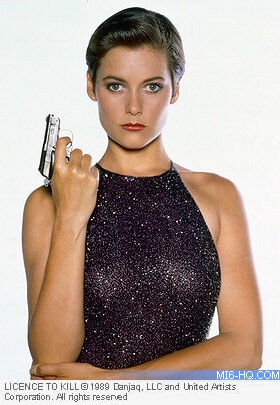 PLEASED TO MEET YOU
Bouvier runs into 007 briefly at Felix Leiter's wedding when she is concluding some DEA business. Pam is brisk and business like and does not give Bond much attention. Later, when Bond attends a meeting with Bouvier in place of Leiter, the pair reluctantly work as a team to escape the vicious Dario and his goons in a bar-room brawl.

CAUGHT IN THE ACT
After a speeding water bound escape and an argument about who will drive the getaway vehicle, Bond discovers that the fuel line to the boat has been damaged and somewhere off the Florida Keys, Bond and Bouvier patiently wait for a lift. 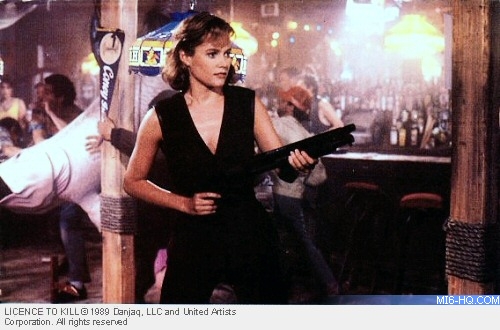 PROFILE
A smart and street-savvy ex-CIA pilot, Pam Bouvier is the only living contact Felix has on his mark: Franz Sanchez. She knows the espionage game well and now contracts her special skills to the highest bidder. Bond pays her off to transport him into Isthmus City, an out-of-the-way South American city where Sanchez is taking refuge. Often a tad rough and ready, Pam is keen to assist 007 whilst he is on his personal revenge mission. Pam, who is really working for the CIA with the hopes of jailing Sanchez forever and nailing his associates with a Stinger missile deal, is a worthy and resourceful ally for James Bond - even if she has to battle against 007's determination to maintain her cover. 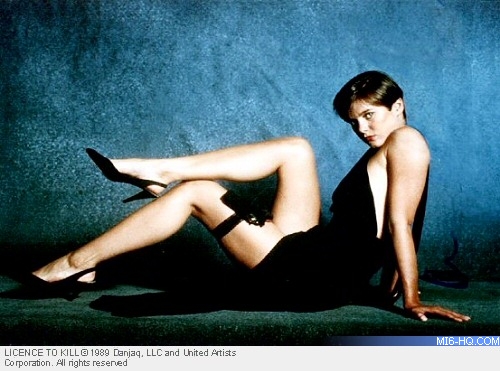 BIOGRAPHY
Born in Huntington, New York to James Lowell the prestigious geologist, Carey spent much of her youth touring the world with her father's work.

Straight out of school Lowell was working for the Ford agency and found herself modeling for fashion brands that included Ralph Lauren and Calvin Klein. She appeared on the cover of a range of highly regarded fashion magazines before trying her hand at acting.

In 1984 she married John Stember, a small time director, but the relationship did not last more than four years before the couple parted in divorce.

Lowell's first on-screen role was in 1986's "Dangerously Close", a low-grade action/thriller. She went on to perform in "Club Paradise" - a Robin Williams starrer - and take the lead in thriller, "Down Twisted", in which Lowell played Maxine. She landing the lead Bond Girl role in Timothy Dalton's "Licence To Kill" in the same year she married her second husband, Griffin Dunne. The pair had a daughter, Hannah, a year later.

The 1989 picture saw the talented actress rise to international fame and on the back of her feisty and credible Bond girl role. She found work in a good selection of pictures during the 1990s, notably John Cleese comedy"Fierce Creatures" - the follow-up to the very successful "A Fish Called Wanda". In 1995 Lowell and second husband Dunne separated.

In the late '90s and into the new millennium, Lowell was a regular on US drama, "Law & Order" where she played Jamie Ross. In 2002, Lowell married big-screen star Richard Gere, after dating for a number of years prior. The pair have one son, Homer, and remain happily married to date.