The first officially sanctioned drawing of Bond as a 12-year-old, released yesterday, shows him as a solitary adventurer dressed in 1930s outdoor clothes. It will be used to sell a series of books and graphic novels aimed at boys, and some girls, who have not yet developed a taste for the killer described in Flemingâs novels. 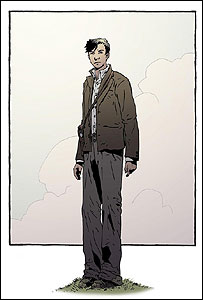 Charlie Higson, the author best known for his appearances in The Fast Show, has written the first of a series of five books that chart Bondâs adventures during his time at Eton.

SilverFin, which has sold 30,000 copies in Britain since it was published last month, is faithful to Flemingâs creation. Higson based much of his character on Flemingâs only description of Bondâs childhood, an obituary written for The Times by M in You Only Live Twice.

M notes that Bond lost his parents in a climbing accident when he was 11, and his aunt sent him to Eton. âIt must be admitted that his career at Eton was brief and undistinguished and, after only two halves, as a result, it pains me to record, of some alleged trouble with one of the boysâ maids, his aunt was requested to remove him.â

Higson based the rest of Bondâs character on Flemingâs childhood and his own. âFleming didnât particularly burden Bond with a back story,â he said. âHe made Bond an extension of himself.â

The young Bond does not kill but he is exposed to grisly deaths in the first book. âHe sees a lot of people die. He sees an American detective being eaten alive by eels, and he also sees the villain and his brother die in a similar way.â

The controlling share of Flemingâs estate was bought back by his family in 1997, 33 years after the author sold 51 per cent of the estate to the Booker group. It is now controlled by his two nieces, Kate and Lucy, who wish to present Bond to a new generation. Other experiments with a younger version of Bond such as James Bond Jr, an American cartoon series that portrayed Bondâs precocious nephew, were not considered a success.

Corinne Turner, managing director of Ian Fleming Publications, said that the family wanted to have the young Bond in the correct setting in the 1930s. âWe wanted to establish the young Bond as a literary series. This is the first serious foray into the youth market.â

Higson, who was chosen because of the dark tone of his adult thrillers, promised that the character would develop into the cold assassin of Flemingâs books. âYou see him witness some intense stuff and he doesnât want to talk about it with his friends. He starts to drift apart from them and he develops a secret inner life.â

SilverFin has been sold to 15 countries and a graphic novel based on Higsonâs character will follow at the end of 2006.