Naomie Harris talks 'No Time To Die' with GQ magazine

Naomie Harris is the feature interview in the latest issue of GQ magazine about her new police drama Black and Blue, and of course, her role as Eve Moneypenny. 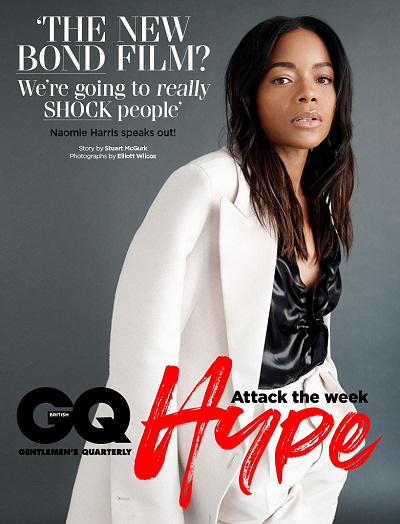 Naomie Harris was hand-delivered the script for the latest Bond film, No Time To Die, but it wasn’t a studio runner or even the director who did the deed. For the latest in the ever-secretive franchise, the woman who plays Moneypenny was visited by none other than the legendary Bond producer herself, Barbara Broccoli.

So no men with briefcases handcuffed to their wrists?

“No, not quite that,” says Harris, laughing. “It was the personal touch.”

And so, straight after, she sat, read it in one go (“There was no putting it down, no stopping for anything”) and decided two things: it was very good (“It’s going to be fantastic”) and it has huge twists.

“It’s a tie-up of Skyfall and Spectre. But with massive, massive surprises that even had me like, ‘Oh, wow!’ So I think we’re going to really shock people.”

At the GQ Heroes summit in May, Harris had said, “The Bond of old, his days are numbered.” Now she’s read the script, has that proved to be the case in what might be Daniel Craig’s last outing as 007?

“I would say that he’s reconnected with his heart. We’re definitely seeing a Bond who’s more in touch with his feelings and more open to falling in love.”

The return of love interest Dr Madeleine Swann (Léa Seydoux) from 2015’s Spectre is, therefore, no coincidence. As Harris adds, “At the end of Spectre there are women he gives his career up for: there’s no more emotional attachment than that. It’s just about moving with the times and recognising that women can no longer be seen as eye candy.”