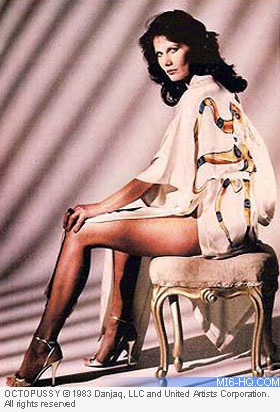 OCTOPUSSY - PLEASED TO MEET YOU
James Bond hears rumours of the lavish Octopussy prior to being ushered onto her exclusive island paradise. When 007 is finally granted a rare audience with Octopussy the encounter is not what he expects. Instead of a cold, harsh jewel smuggler Bond faces up to a charming and sophisticated lady and one that remembers Bond from her past.

"Oh James, we're two of a kind. There are vast rewards for a man of your talents willing to take risks."

CAUGHT IN THE ACT
Although Octopussy initially puts herself between Bond and his mission it is a surprising alliance against the double crossing Kamal Kahn that bring these two together. Bond is charming as usual and manages to persuade Octopussy to look beyond the riches offered by Kahn and to work in the interests of justice. The alliance soon develops and on the idyllic Mumbai lakes, so does their personal relationship. 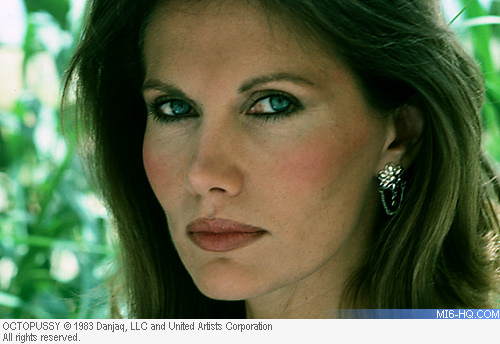 PROFILE
A resourceful and feisty young businesswoman, Octopussy is caught up with the smuggling game and hoping to make a fair fortune. As the ringleader of an all-feminine circus, the elusive Octopussy trains her girls to do more than perform in the big top. The troupe is nimble enough to put themselves to use when raiding Kahn's Monsoon Palace, silent and undetected. The daughter of an ex-military officer in British pay, Octopussy recalls 007 from a previous mission that involved her father and a fraud case. Bond tracked Major Smythe, her father, to his remote hiding place and gave him a chance to put his affairs in order before his arrest - for this Octopussy expresses her gratitude. The resourceful Octopussy has since made the best of life, seeing herself rise to great fame and a circus performer and gain fortunes in illicit jewellery smuggling. 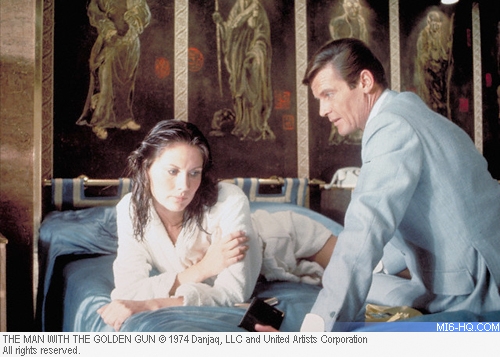 THE MAN WITH THE GOLDEN GUN - PLEASED TO MEET YOU
James Bond first runs into Andrea Anders at the Casino in Hong Kong, where the damsel is running an errand for Scaramanga - collecting his precious golden bullets. Bond lets himself into her hotel room whilst she is showering, but it is he who is met with a surprise. Calmly, Bond rectifies the problem and disarms Anders, whilst questioning the coy mistress about her employer.

"You can have me too, if you like. I'm not unattractive."

CAUGHT IN THE ACT
When Bond discovers more about Anders, this time in his hotel room. After a romantic dinner with Mary Goodnight, the pair retire to 007's room for a nightcap only to be rudely interrupted by Anders. Shoving Goodnight in a wardrobe, Bond turns his charms to the lovely yet fragile Andrea Anders. She reveals that Scaramanga was not after Bond as he was lead to believe and it was she who left the death threat with MI6. Bashfully she offers herself as a prize for the assassination of The Man With The Golden Gun. 007 does not refrain from trying the merchandise. 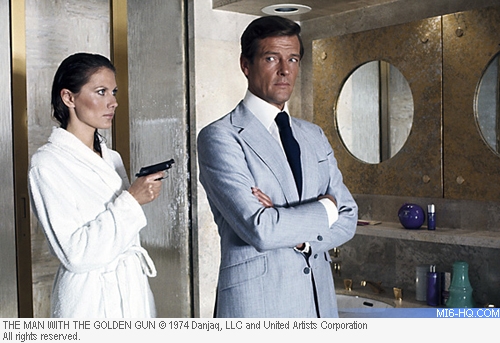 PROFILE
Andrea Anders is the doomed mistress of the hot-shot marksman Francisco Scaramanga who has a watchful eye over his prize at all times. If she is not on his remote island in the Phuket region, she is aboard his Junk or running errands. Onlookers will get the sense that she was once a bold and independent woman, only to have fallen under the spell and subsequent imprisonment that went hand in hand with romancing a psychotic assassin. Anders is now a timid and self-deprecating woman who will give anything to anyone who can free her from her captor. 007 is just the man she needs and in a moment of genius orchestrates a ruse to convince MI6 that Bond is the target of Scaramanga. Unfortunately as 007 gets closer to his mark, Anders' days are numbered, with Scaramanga spending one of his expensive golden bullets on his mistress. 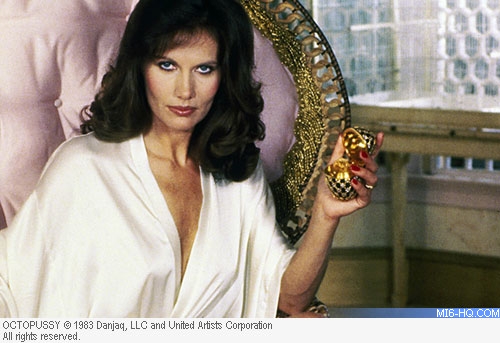 BIOGRAPHY
Born Maud Solveig Chrisitana Wikström to parents Thyra and Gustav who were both in the tax and finance industry. A clever study, Maud Adams grew up to learn to speak over five languages fluently and considered becoming a translator before entering entertainment. When she was 22, she was discovered by a photographer who wished to submit her image to the Miss Sweden competition. Without any inclination or aspirations to become a model, Maud breezed through the competition and was picked up by an agency.

Her first shoot was for the cover of Swedish magazine, "Allers", before pursuing her newfound career in Paris. From there she took her work to the States - landing a prestigious job with the illustrious Ellen Ford. As one of the best known modeling agencies in the world, Maud was lucky to be taken on by Ellen, but her charm and delicate looks stood her in good stead and the model rose to become one of the agency's highest paid employees. In 1966 and a new face in NYC, Adams married photographer Roy Adams. However, the relations were not to last and the pair separated in 1975.

She played a small role in the 1970 film "Boys in the Band" for where she played an uncredited model. Adams further went on to appear in more prominent roles such as Miriam in "Mahoney's Estate" (1972) and the co-star Paulua in "U-Turn" (1973) - a steamy 'youth flick'.

It was the mistress of the title character in James Bond film 'The Man With The Golden Gun' that sought Adams international recognition. Her role alongside Roger Moore and Christopher Lee as the assassin's doomed mistress saw Maud's career blossom.

Adams ended up in films such as "Rollerball" and popular TV series such as "Kojak" and "Starsky and Hutch". A few alternate films later saw her return to the Bond series - becoming the first and only Bond girl to date to reappear in the series in major roles - as the stunning Octopussy. The title role was far 'meatier' than her previous encounter with 007 and Maud demonstrates some of the classic Bond-girl traits, with her own unique spin on the character.

Following Bond, Adams' career was slower and her films less memorable. She appeared in 22 episodes of "Emerald Point N.A.S." and variety of one-off TV flicks. Adams even appeared alongside fellow Bond girls Tanya Roberts, Kristina Wayborn and Barbara Carrera in the 2000 episode of "That '70s Show".

Adams currently runs the cosmetics company, "Biocosmetics" and is married to her second husband the ex-judge, Charles Rubin.