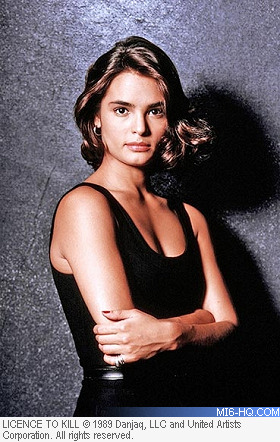 PLEASED TO MEET YOU
James Bond first fleetingly sees Lupe Lamora in Cray Key when Franz Sanchez has hunted down his fleeing mistress, and is on the run from the DEA. Later, when Bond boards the Wavekrest to set up Milton Krest, 007 discovers Lamora sleeping in her cabin, recognising her from their earlier meeting. He notes with disgust the scars on her back received during her beating.

"Don't you know - iguanas are a girl's best friend?"

CAUGHT IN THE ACT
Lupe and Bond share an off-screen tryst at Sanchez's mansion, much to the surprise of Pam Bouvier and a dismayed Q when she declares her love for 007. 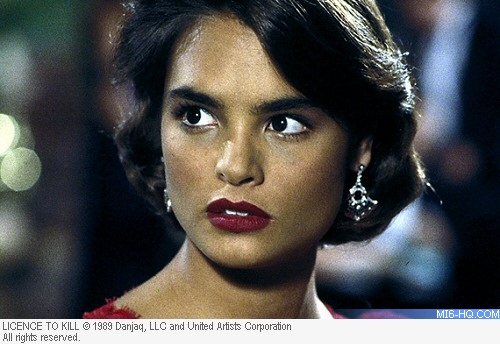 PROFILE
Lupe Lamora is the mistress of drugs baron Franz Sanchez. Despite repeated attempts to escape his grasp, Sanchez manages to catch up with her and punishes her for the betrayal - something Sanchez takes very seriously. Lupe is whipped by an enraged Sanchez, and fleetingly catches the eye of 007 when they escape the DEA's grasp.

Whilst onboard the Wavekrest, Lupe has her second encounter with Bond, as he breaks in to her cabin. The pair meet up for third time in Isthmus City when her background as a casino dealer comes in to play, as Sanchez wants to discover Bond's intentions. Lupe is instrumental in tricking Sanchez in to trusting Bond, as she sees 007 as her escape ticket.

After spending the night with Bond - in Sanchez's mansion no less - Lupe then confronts an unwitting Bouvier at 007's hotel room and declares her love for him. She bows out of the action as 007 and Bouvier take on Sanchez and his personal army at the drugs plant, but reappears at an after-party where she is paired off with El Presidente after 007 passes on her invitation. 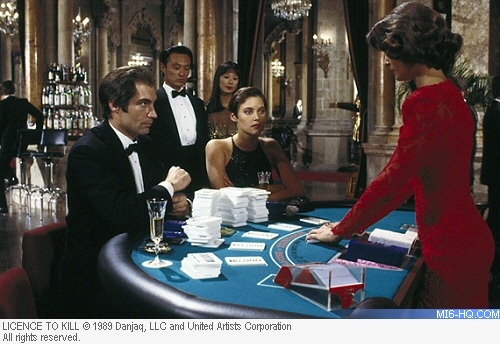 BIOGRAPHY
Born Miriam Soto to a Puerto Rican family in Brooklyn, Talisa was raised both there and in Massachusetts. She started modeling at the age of 15, and has appeared on the covers of "Vogue", "Mademoiselle", "Glamour" and "Self", as well as in a "Sports Illustrated" swimsuit issue.

Rumour has it that when she started modelling, she changed her name to Lisa. However, on working on assignments, co-workers often would say "Tell Lisa this" and "Tell Lisa that", so she decided to rename herself Talisa.

Her first big screen role came in 1988, when she played India in the forgettable Spike of Bensonhurst. However, she was soon noticed, and the next year appeared as a Bond girl in 'Licence To Kill'.

In 1990, she was chosen by People magazine as one of the 50 Most Beautiful People in the World and the offers started to come in. After two television appearances, she was back into movies, appearing in Hostage (1992), The Mambo Kings (1992) and Don Juan DeMarco (1995).

However, it wasn't until 1995's Mortal Kombat that she really found her niche, putting in a great performance as high-kicking Princess Kitana, and returning for the follow up in 1997.

Soto was been married to Costas Mandylor from May 1997 until the pair divorced in 2000. She later married Benjamin Bratt in 2002, who she met while filming Piñero in 2001. Talisa and Bejamin had a baby girl on December 6, 2002 in New York City. Her name is Sophia Rosalinda Bratt and she weighed in at 7 lbs.

She currently lives in Los Angeles "in a lovely house up in the hills with no pool but lots of balconies and great views", and is expecting her second child in the Fall of 2005.