PLEASED TO MEET YOU
Tatiana Romanova is assigned to seduce and distract James Bond by a duplicitous Rosa Klebb. She first catches 007's attention with a photograph in her MI6 Dossier, but proves even lovelier in person. She successfully sneaks into his hotel suit in Istanbul in the middle of the night, and professes her love for James Bond.

"The mechanism is... Oh James, James... Will you make love to me all the time in England?"

CAUGHT IN THE ACT
It is mere moments after the couple meet that Agent 007 and Tatiana Romanova form a bond. Tatiana slinks under his hotel bed sheets wearing nothing but a black lace choker. Little do the lovers know that agents of SPECTRE are recording the action from behind a one-way mirror. 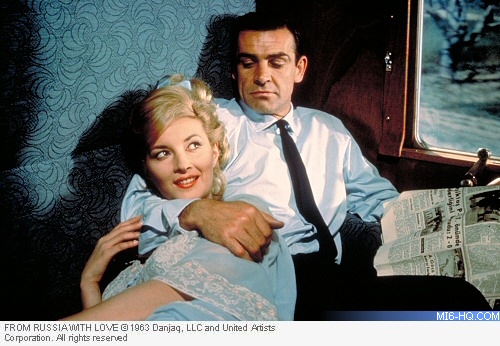 PROFILE
Tatiana Romanova works a cipher clerk in the Russian security service's Istanbul office. Under high security, Tatiana works with the Lektor decoder, the latest in Russian secret transmission technology. Colonel Klebb (actually working for SPECTRE) recruits Tatiana to seduce British Agent 007 in a double bluff to "mislead British Security". It is 007's intention to take her safely back to England with her "dowry" - the Lektor decoder. In reality, the lovely cipher clerk is a pawn in SPECTRE's deadly game that could ultimately lead to the death of both Tatiana and 007. The ultimate Russian spy easily gets under 007's skin! 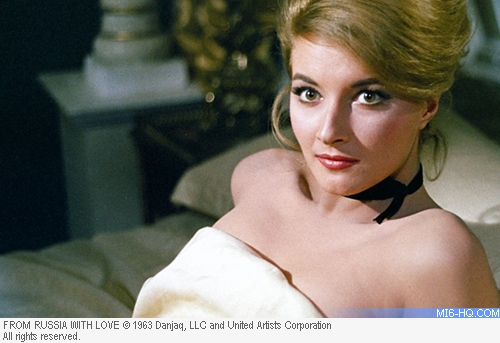 BIOGRAPHY
Biography Born in Rome in 1943, Daniela Bianchi grew up the only child of an army Colonel. After graduating from high school Bianchi found a passion for ballet before launching into a modeling career.

In 1960, she won the Miss Rome pageant and the same year came runner up in the Miss World competition winning the title "Miss Photogenic". With the modeling career in full swing she won jobs as far away as Moscow and with a successful modeling career made her break into filmmaking. After roles in three productions in Italian cinema, Bianchi received her Hollywood break with her role in the 1963 James Bond outing, 'From Russia With Love'. Over 200 actresses from around the globe auditioned for the role of the Russian cipher clerk but it was ultimately handed to Daniela Bianchi. As a parallel to the film, director Terence Young selected Bianchi from headshot when she was sick and unable to meet her audition.

Young and Broccoli made an appointment with the actress at her home and, twist on the old cliché, Bianchi performed her initial audition reading from her bed - the same scene that she would be best remembered for. After the successful first audition, she was flown back to Pinewood studios so the producers could make a decision on the casting. It was narrowed down to one of three actresses for the role (including model/actress, Pia Lindstrom). Bianchi remembered, "I was so excited during the first week of waiting that I couldn't sleep. Then when two and three weeks passed, I began to lose hope, but when they called me back to London for further tests with a new make-up and hairstyle, my spirits zoomed again."

During the shooting of 'From Russia With Love', Bianchi was caught up in an almost fatal car accident when the vehicle toppled over a 15-foot drop. Daniela had a lucky escape, but her scratches and bruises forced director Terence Young to re-work the shooting schedule to give Bianchi's face two weeks to heal. Bianchi was impeccably dubbed for the role.

After her name headlined the numerous posters and promotional material for From Russia With Love, Bianchi became a household name - her beauty and seductive character charming Bond fans across the globe. However, it would be the first and last of her career in high-profile, international filmmaking.

Bianchi's roles, post Bond, consisted of a small handful of Italian and French pictures. In 1967, she cashed in on the Bond connection, starring in the low-budget Italian spy spoof Operation Kid Brother, which marked the screen debut (and farewell) of Connery's brother Neil. She retired from acting in 1970 to marry a Genoan shipping magnate. They have one son.