Working from a remote volcano lair, arch enemy Ernst Stavro Blofeld is capturing US and Soviet manned capsules in outer space. With the Americans and Soviets blaming each other for the incidents, Bond travels to Japan to lead a ninja army and destroy Blofeld before WWIII erupts.

An American spacecraft is stolen whilst in orbit by another - mysterious - spacecraft. America is convinced that Russia has stolen the craft and threatens war. Meanwhile, the British claim that they know something the Americans don't: they have evidence that the spacecraft returned to earth near Japan and that their man is on the case. The next shot is of Bond, who is in bed with a Chinese woman. Ling walks across the room and presses a button. Suddenly the bed folds up into the wall and armed men burst in shooting at the vertical bed. The authorities arrive and pronounce 007 dead at the scene.

The title is taken from Ian Fleming's twelfth novel and the plot point of Bond being 'killed' so he can continue to work undercover, with his enemies assuming he is dead and out of the picture. The title is uttered by Blofeld when he realises Bond was not assassinated in Hong Kong after all.

When Bond enters the Sumo game the writing above the door reads, "Beauty Parlour" in Japanese.

Ernst Stavro Blofeld's face is seen for the first time, revealing him as the archetypal alopecian villain.

The mid-1970s broadcast on ABC was confusingly reedited in places, and in fact placed the pre-credits scenes after the opening credits, save for a few seconds shown prior to the theme song.

The 1995 MGM/UA video release includes English subtitles for Japanese dialogue heard during the scene where Bond is turned into a Japanese fisherman. Some TV prints do not have these subtitles. 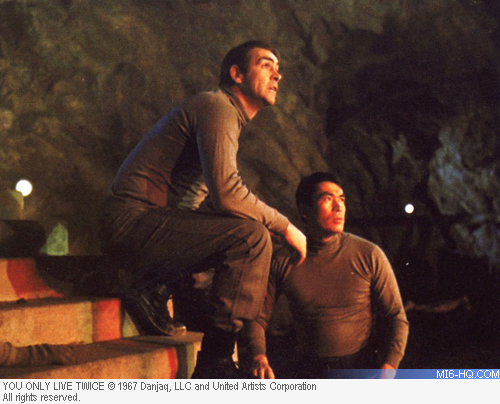 The 1992 MGM/UA UK VHS widescreen edition crops the gun barrel sequence and the opening shot of the space capsule into a 4:3 ratio within the widescreen picture. The cropping is removed when the scene cuts to the astronauts, thus showing the full widescreen image.

You Only Live Twice

More You Only Live Twice

Videos Ten years on, Daniel Craig and Javier Bardem look back on Skyfall

Podcast What changes or different decisions could have been instrumental in improving Licence To Kill's success?

Videos MGM has released the Daniel Craig documentary on YouTube

Podcast Join us as we watch 1954's live television production together